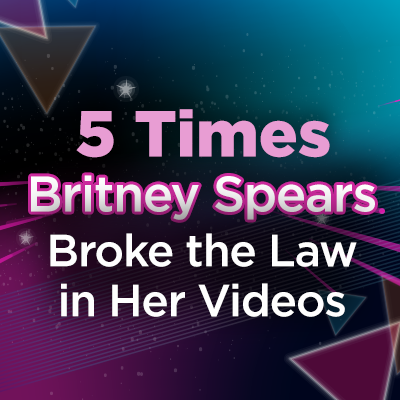 Britney Spears is one of the biggest music stars of all time. Since 1999, she’s consistently set the world on fire with her unique brand of dance pop, but it’s her videos that really bring her songs to life. And as a background screening provider, we couldn’t help but notice how bad her background check would be if she actually did all the things she pretended to do in her videos. So today, on her 37th birthday, we’re looking back at her five most deliciously criminal video moments.

So this first moment technically isn’t a video, and her behavior here technically wasn’t criminal, but her 2000 MTV Video Music Awards performance makes the list for it’s pure shock value. Britney starts the performance off in a totally demure business suit and then BAM! She rips it off to reveal a nude-colored bodysuit. While sex definitely sells, we’re confident our clients wouldn’t want a gorgeous candidate who would go ripping their clothes off in the middle of an important meeting… or would they? Hmmm.

Britney is in full-on bad girl mode in “Toxic.” She starts the clip off as a flight attendant with a penchant for sexually harassing the male passengers on board. She then parachutes out of the plane, trespasses on private property and breaks into a safe. Oh, and she makes time to fit in a motorcycle ride with Tyson Beckford. She’s criminal, but efficient. Is that a transferable skill?

Britney floors a souped-up muscle car around a sharp curve, loses control of the car and flies into a mansion’s pool. There’s an exclusive party going on outside, but no one bats an eye as she emerges from the water and does a sexy bump and grind on the hood of the car. Britney party crashes like a boss. Imagine what she could do to amp up this year’s company holiday shindig.

In “Womanizer,” Britney’s guy is cheating on her, so she takes on the identities of a secretary at his job, a bartender at his happy hour and his limo driver after work, and literally beats the crap out of him all day. He had it coming, but we still wouldn’t put Britney in charge of our employee corrective action plan.

Crime: Armed robbery, carjacking, assault
“Criminal” is a modern-day take on the classic Bonnie and Clyde story, but waaaay sexier. She’s the only person on the planet who could make armed robbery, carjacking and assault look good. Since she’s good at spin, she’d probably be a pro at corporate communications.