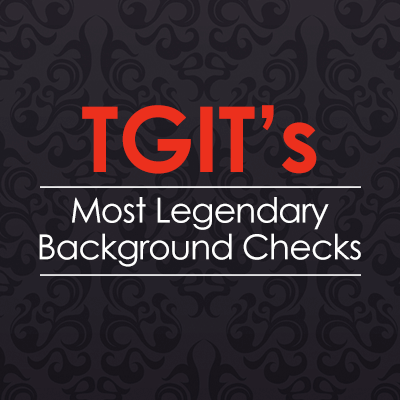 Branded Thank God It’s Thursday (TGIT), ABC’s Thursday-night primetime drama programming takes the classic “whodunit” cocktail and spikes it with Red Bull. In particular, “How to Get Away with Murder” and the now dearly departed “Scandal” are 60 minutes of pure, unadulterated WTF. Aside from their wild plot twists, these two dramas have something else in common: both are driven by storylines that feature unbelievable, non FCRA-compliant background checks and investigations. Let’s take a look at some of the more memorable probes.

That time when Olivia threatened to ruin the life of President Grant’s mistress on “Scandal”.

Whew! Who knew a walk in the park could be so terrifying? In the pilot episode of “Scandal,” Olivia Pope struts right up to President Grant’s mistress as she’s walking her dog and runs down all sorts of unseemly details about her life. The goal? Scare her into keeping quiet about the affair. And apparently, nothing is off-limits in the Pope & Associates background check, as Olivia knows how many sexual partners the woman’s had, her sexual health history and details of her mother’s mental illness. Creepy.

That time when Nate found out about Bonnie’s secret baby on “How to Get Away with Murder”.

Good old Detective Nate Lahey. Never one to leave a stone unturned (even if turning the stone will do more harm than good), Nate finds the background check file that D.A. Todd Denver had on Annalise Keating and her crew, and learns that Bonnie had a baby when she was 15. Bonnie believes the baby died at birth, but Nate pulls a number of investigative tricks to prove that the baby was kidnapped from the hospital, including DNA tests and unearthing HD, crystal-clear security footage from 20+ years ago. Gives new meaning to the term “thorough,” that’s for sure.

That time when Papa Pope got got on “Scandal”.

Throughout Scandal’s run, Eli Pope was Mr. Untouchable. He was typically the one executing the invasive background checks via questionable methods. That is until Season 6, when a mysterious shadow organization does some research and learns of Papa Pope’s only weakness — his one true love from graduate school. The organization uses the info to strong-arm him into assassinating President-elect Frankie Vargas. I wonder which background screening provider they used? Hmm.

That time when Olivia Pope and Annalise Keating unearthed each other’s messy pasts via Google.

In a battle for the ages, Olivia Pope and Annalise Keating, the star characters on “Scandal” and “How to Get Away With Murder,” met when ABC decided to air a two-hour crossover episode. In one of the pair’s many verbal clashes, we learn that Annalise and Olivia simply Googled to learn about each other’s sordid histories of murders, affairs and firings. For shows that usually make a big to-do out of background checks, the crossover event took a surprisingly pedestrian approach.

If you organization needs help with its background screening program, contact JDP!