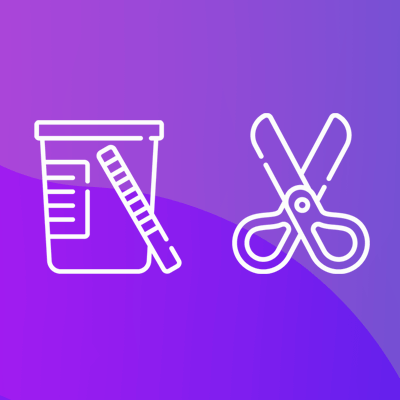 No matter the reason, employers have options for which drug testing method to use. Two of the most common drug testing methods are hair testing and urine testing. These tests differ primarily in how they’re conducted and how far back they can detect drug use.

The most common form of drug testing, urine drug testing detects substances by analyzing a urine sample provided by a patient. Urine drug tests typically detect drug use that has occurred within the one to three days prior to the test being conducted.

The person taking the drug test will receive a specimen cup at the clinic conducting the test. They’ll fill the cup with at least 45 milliliters (or a little over 3 tablespoons) of urine. Once the person has collected their sample, the person administering the test will check to make sure it’s in the normal temperature range before sealing it for testing.

What Drugs Can a Urine Drug Test Find?
Urine drug tests are able to detect:

Employers may not always test for every drug a urine test can detect. Employers who use JDP’s drug screening services may request a custom panel to test only for specific substances.

When Should a Urine Drug Test Be Used?
Urine drug testing is appropriate for pre-employment screening, random drug testing and post-accident drug testing.

Because urine drug tests detect substance use that occurred one to three days prior to the test being conducted, it may not be the best option for employers who need to have a better understanding of their candidate or employee’s longer-term drug use.

It’s important to note that a positive result on a urine drug test does not necessarily mean that the individual was on drugs at the time of the test. It only means that drugs were in their system within the few days leading up to the test.

What is a Hair Drug Test?
Hair drug testing (also called hair follicle drug testing) involves taking a sample of hair to look for patterns of drug use over the previous 90 days.

During the test, around 100 strands of hair will be removed from the back of a person’s head. The person collecting the hair will typically cut a 1.5 inch long sample. Once the hair has been collected, it’s sealed in foil and shipped for testing.

What Drugs Can a Hair Drug Test Find?

Employers may not always test for all of the drugs a hair drug test can detect.

When Should a Hair Drug Test Be Used?
Hair drug tests are ideal for looking at long-term drug use. Since hair tests can identify substance use over the past 90 days, they give insight into how often an individual uses drugs.

Because hair drug testing offers a window into the past, employers typically use this testing method as part of their pre-employment screening process or as part of a random drug screening for employees.

How Much Hair Is Taken in a Hair Test?
As Quest Diagnostics explains, a hair drug test requires about 100 – 120 strands of hair, or the equivalent of a one centimeter wide row of hairs. This hair is typically taken from the crown of the patient’s head.

Need to conduct a hair drug test on a bald person? Not a problem. Hair can also be collected from the chest, underarms, legs or face.

Can a Person Who Uses Doctor-Prescribed Drugs, like Opioids, Pass a Hair or Urine Drug Test?

Typically, when a drug test detects opioids, the individual will be asked if they have a valid medical prescription. If they’re able to provide the prescription, they shouldn’t be penalized for the positive result on the drug test.

It’s important to note that some safety-sensitive jobs prohibit the use of opioids, even when the candidate or employee has a valid prescription.

Your decision to conduct urine drug tests or hair drug tests will depend on the goals of your testing, how quickly you need results and your budget.

Generally speaking, hair drug testing is ideal if you want to learn about a person’s drug history over the past three months. If you’re concerned about recent use (for example, if an employee had an accident on the job today and you need to find out if drugs could have played a role in the accident), a urine drug test will be best.

When deciding which you should use, keep the following considerations in mind: