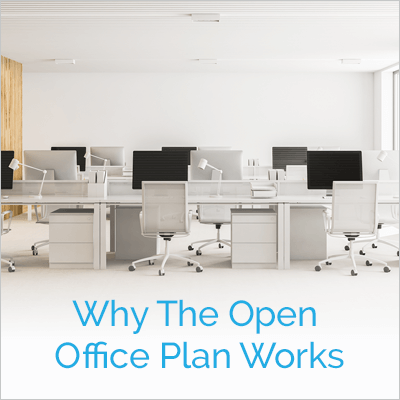 Open offices are popping up everywhere. Along with their seemingly overnight ubiquity has come an abundance of detractors — well equipped with a long list of reasons as to why the open office is a disaster, including noise and germ concerns. But ultimately, we think the good outweighs the bad, and here’s why.

It looks and feels better.

Traditional cubicles can make an office feel stuffy and confined, with every worker trapped in their own little box. But the open office does just what its name implies — it opens up the space and creates a light, airy vibe that gives everyone more room to breathe.

When employees can physically see the colleagues they need to work with, they’re more likely to walk over and chat with them in person instead of firing off an email. This gets everyone up from behind their screens and participating in face-to-face interactions, which helps to build relationships that could prove beneficial to overall team morale. This increased communication is called “culture collision,” which is what happens when encounters between workers in open offices lead to increased creativity, support and a heightened sense of community.

Whether you’re a startup or well-established organization, everybody has one eye on the budget when it comes to office remodels. The good thing about open offices is that they’re extremely cost-effective to implement. Depending on the layout that’s chosen, you could save a ton by not having to buy large individual desks, cubicle walls and other items used in more traditional spaces. In the end, this leaves you with more money to invest in growing the company.

The airiness of the open office offers flexibility that you won’t find in traditional environments. If you find that a particular element isn’t working in the open office, it’s a lot easier to remove and adjust accordingly. Plus, workers have the option of working at their assigned desk, or in one of the other private nooks that are often carved out in open spaces.

Everyone is more approachable.

In more walled-off office environments, the big bosses typically get the best offices, and everyone else gets cubicles. This creates a hierarchy that makes those not in leadership feel less important. But the truth is, it takes employees of all levels and all skill sets to make a business work, and the open office puts everyone on equal footing. The CEO is just as approachable as the receptionist.